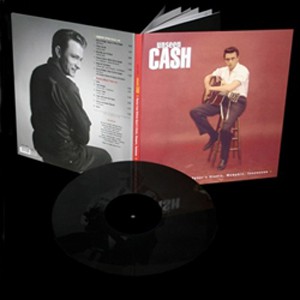 Think you've seen it all by Johnny Cash? Think you've heard it all by Johnny Cash? Think again! An innovative artist like Johnny Cash deserves an innovative package. Here, striking unpublished images from early in Cash's career are packaged with a one-sided LP of Cash on-stage in 1957 and 1959. The flipside of this limited edition LP features a portrait of Johnny Cash, engraved into the LP's audiophile-grade 180 gram vinyl. Packed in a 16-page hardcover book. A true collector's item!Unseen photos, rarely heard audio! Released to coincide with the 80th anniversary of Johnny Cash's birth!

In 1955, at the dawn of his long career, Sun Records president Sam Phillips sent Johnny Cash to a nearby photographer, William Speer. Cash was fortunate because Speer was an innovative craftsman, influenced by vintage Hollywood photographers who used light in a dramatic new way. Speer shot photo sessions with Cash, between 1955 and 1958. A couple of images were published in the 1950s, but the rest were stored away... until now. Realizing that the photos deserved to be seen full size, Bear Family lustrously restored them and packaged them in a 16-page LP-sized hardcover book, accompanied by a one-sided LP of rare live audio from the same era. The other side of the LP features a portrait of Cash engraved into the audiophile-grade 180 gram vinyl. And so now, eighty years after Johnny Cash was born in rural Arkansas at the height of the Great Depression, we see him in a new light.

There are many Johnny Cash collectors, and this is Cash in words, music, and... above all... striking unpublished images!

Also available as a digipak CD with a 28-page booklet.