The Patriot In Black 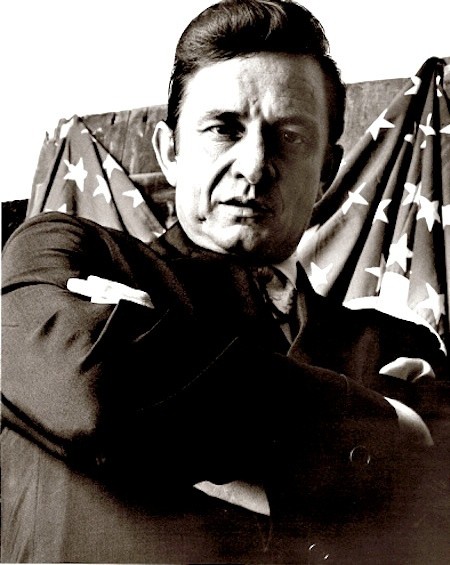 Patriotism is a word that is hard to define in America.  Is a patriot someone who blindly accepts the customs of his or her country?  Is a patriot a questioner--a revolutionary?  Does a patriot have to be political, or does a patriot transcend partisan conflicts? These questions are deeply personal and open to interpretation and prone to change as circumstances change.  Johnny Cash was also ever changing, and parts of his life were headlined in world news while other aspects belonged to him alone.

Johnny Cash has been claimed by America but we haven’t always done him justice in the states.  He is too hard to categorize in almost every sense.  His complexities can make his fans feel uneasy.  He is a man who was an outspoken Christian, yet Cash himself usually denied to affiliate with a branch of Christianity and simply called himself “spiritual.”  But that broad label does not quite do him justice--as his daughter Rosanne once said, her father might better be described as a “mystic.”  As Cash himself stated in his second autobiography, he kept both a Navajo Dream Catcher and a crucifix in his trailer to ward off bad spirits, and he openly--but quietly--sought to put an end to religious differences (he won the Jewish National Fund’s “Shalom Peace Award” for seeking to peacefully resolve religious conflicts in Israel in 1986).  He recorded a Kahil Kibran book that combined Christian, Islamic and Buddhist philosophy.  His faith emphasized a core component of the positive aspects of freedom in America: Johnny Cash was not afraid to proclaim his own beliefs nor was he about to defending, encourage and embrace all the differences of this melting pot nation.

He was an activist and humanitarian, but supported ideas rather than specific political parties.  However, many people today try to romanticize him as being above politics completely, and that statement does not accurately describe the Man in Black.  On February 12, 1988, he did endorse Al Gore for president, and the two maintained a friendship for the rest of Cash’s life.  But it was the friendship with the person, never the political affiliation, on which Cash based his relationship with politicians.  He met with every president starting with Nixon.  He always treated the presidents with due respect, befitting of their office.  It seems that Cash realized, especially once he started his own TV show late in 1969, that he was a public figure, and for better or worse, people would follow his example in making choices and also use him to promote their own causes.

So Cash used his influence carefully but he did not ignore the responsibility that fame brought about. This author believes that Cash became an actual American idol after the run of his TV Show, where he solidified his stance as someone who could oppose war but support troops, who could defend hippies and perform for Nixon, who could get Ray Charles, Merle Haggard, Bob Hope and Bob Dylan on the same show.  He was rebel, he was a southern gentleman, he was a uniter.

In 1974 Cash made his first original album of songs written only by him--a patriotic album in many senses--and it was in many ways a controversial album.  Cash was catering to two groups--the liberal folk fans who clung to his concept albums in the 1960s and the new conservative Nashville crowd who loved his more traditional country and gospel shift.

Cash’s 1974 album was Ragged Old Flag and the title song became a widely adopted patriotic anthem.  The song wasn’t afraid.  It wasn’t a song of blind patriotism.  It acknowledged the many races (black, yellow, red and white) that shed red blood to help keep this nation alive.  It managed to show our strength through all of our wars while also touching upon the tragedy of war.  It mentioned the scandals that our government had recently suffered and all the commotion about flag burning.  The issue of flag burning can bring us to a story that helps to define Johnny Cash’s idea patriotism and responsibility fanbase--his countrymen.

Before performing “Ragged Old Flag” in the 1980s and early 1990s, Cash would open the song by stating, “I love all the freedoms we have in this country.  I’m thankful for our right to burn the flag if you  want to.  But I’m especially proud of my right to bear arms, so I can shoot you if you try to burn mine.”  One day, after doing that song with The Highwaymen (Willie Nelson, Waylon Jennings and Kris Kristofferson) he went backstage.  As Kristofferson recalls it: “My son Johnny [Kristofferson], who was about 4 or 5 at the time, said to John [Cash] when we were backstage, ‘I’m gonna shoot you!’  And it was a line that always got [Johnny Cash] a tremendous amount of applause.  And [Cash] looked at my son and he said, ‘I’m never gonna sing that again.’  And he never did.”  Johnny Cash was responsible with the power he held over his audiences and would not compromise what he felt his ideals were for the mere sake of  entertainment.

His album Ragged Old Flag was also uncompromising.  “Don’t Go Near The Water” was his protest song against businesses that were careless with pollution.  “Southern Comfort” was an ironic ballad of a tobacco employee whose line of work was slowly killing him--and the theme of the exploited worker was also present in “King of the Hill,” where Cash admits that the American dream doesn’t really come true for all hard workers.  But he also sang of his newfound faith, of God and Jesus in “Pie in the Sky” and “Good Morning Friend.”  He sings for the truck driver, for the prisoner, for heartbroken and the poor.  These are the roads that Cash travels in just one album.  This author admits that he could not find a “target audience” that would agree with the message in every song.  But there is no one that I can think of who could not identify with at least one of the songs.

Johnny Cash isn’t only America’s treasure.  A part of him belongs to the world.  He was open-minded, a man who saw no boundaries in his work, beliefs and in life.  He helped SOS Children’s Villages in Jamaica and Germany as readily as he did in his own country, because he knew humanity was global, and that our differences were not as strong as our similarities.  But it is only fitting that we think of this Air Force Veteran, who admitted to not being “military minded,” but who played for his troops overseas,  as our day of independence arrives.

Johnny Cash is as difficult to define as patriotism itself, but maybe it is only by going down many roads that we can find the definition.  I have asked some friends and family members who knew Cash to share some memories of Johnny’s patriotism to honor his memory on the 4th of July.

Bill Miller, a long-time friend and founder of both the official Johnny Cash website and the recent Johnny Cash Museum said, "Johnny Cash is as much a part of the fabric of America as the Founding Fathers. With his magnificent recitation of Ragged Old Flag, he took the story of our country to people in lands in every corner of the globe."

Henry Vaccaro, a long-time friend of Cash and author of “Johnny Cash Is a Friend of Mine” said “Johnny Cash was against war and was a man of peace. But he loved our country and went overseas to Vietnam just to entertain our troops. June would go out of her way to bring back messages from the wounded and personally call their families. Johnny even went to our base in Guantanamo Bay, Cuba to put on a show.”