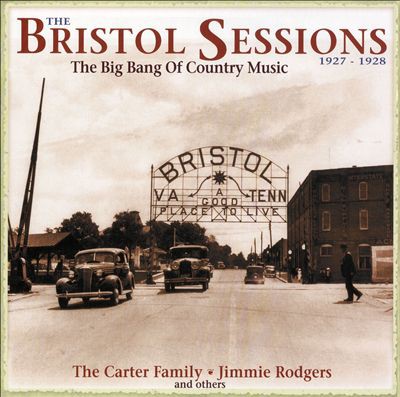 Only a handful of recordings can be called genuinely historical – and then only in retrospect: Robert Johnson at the Gunther Hotel in San Antonio (1936), The Beatles with George Martin at Abbey Road (1962) and, of course, Ralph Peer’s Bristol, Tennessee sessions of 1927 and ’28.

The Carter Family and Jimmie Rodgers were “discovered” at Peer’s temporary field studio, set up in a hat factory, but anyone listening to this 5-CD collection without the benefit of a cast list would not necessarily pick either out as the “best” (though, it has to be said, the consummate “blue yodeling” was already in place). There’s superbly accomplished playing from the very first track on the first CD, by Ernest V Stoneman and some of his many compadres.

Stoneman makes an interesting case study: he was already making a substantial living as both a performing musician and a recording star ($3,600 per annum when the average annual wage was $1,000). In fact, Stoneman was one of the main reasons Peer set up shop in Bristol, since he knew he would be able to get viable new material for release.Something else evident from that first track is the quality of the recording. Bear Family clearly put a lot of effort into cleaning up the overall sound, but the underlying material has to be good for that to work, and Peer’s state-of-the art recording kit paid dividends. Not all of the tracks are equally clear – it seems the new Western Electric microphones weren’t too happy with rougher-edged voices or the sonic vibrations that slightly ragged harmonies generate – but the general standard is excellent.

The Bristol sessions are now hailed as country’s Big Bang but, at the time, Peer was just recording music. Labels came later as a result of commercial imperatives – and the variety of material here shows clearly that there was no single “hillbilly” musical tradition; or, alternatively, that it was enormously inclusive.

Take Disc Three as an example: The first eight tracks are by The Carter Family, including two classics by Sara and Maybelle without AP – Single Girl, Married Girl and The Wandering Boy. As Red Olson and Tony Russell write in their sleevenotes, this session “went a long way towards defining the sound of modern country music”. But straight after come two immaculately-harmonised sacred songs from The Alcoa Quartet and then a pair of harmonica-driven stompers from Henry Whittier. The first of them, Henry Whittier’s Fox Chase, is an intriguing combination of blues, novelty and folk tradition: think Stone Fox Chase (c’mon – Old Grey Whistle Test) performed not by slick Nashville sessioneers, but by a single man standing on a mountain ridge in Virginia trying to entertain a crowd of miners drunk on moonshine. The good-time factor continues with The Shelor Family, whose clearly distinguishable Irish tradition could have been a template for The Pogues; then the raggedy old-time songs of Mr & Mrs J W Baker, the ineffable Jimmie Rodgers… and so on, through The Tenneva Ramblers, The West Virginia Coon Hunters and finishing off with more sacred songs from The Tennessee Mountaineers. In summary, a marvellously eclectic mix.

Being a Bear Family product, the attention to detail and packaging is beyond reproach. Inside the box is a vinyl-album-size book full of information about the sessions, the musicians, the songs and the discs, illustrated with evocative old photographs and maps. As with historic recordings, there are very few genuine “must-have” collections, but this, like Harry Smith’s Anthology Of American Folk Music, is definitely one of them.