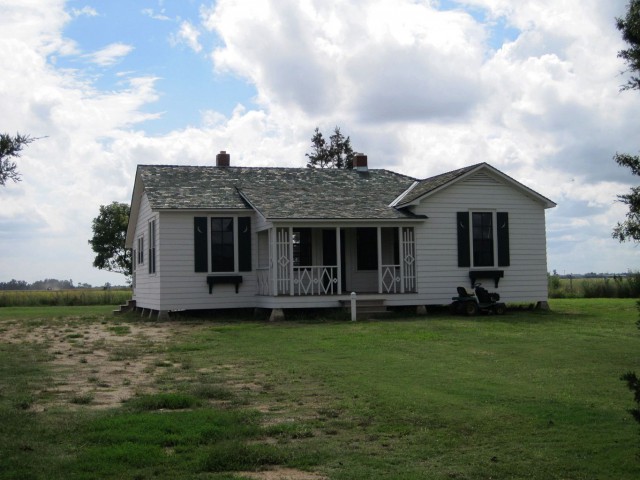 After much planning, work is finally set to begin later this month to restore Johnny Cash’s boyhood home in the eastern Arkansas town of Dyess.

A ceremony is planned for Sunday, Feb. 26, which would have been Cash’s 80th birthday.  The music legend died in 2003.

“We are using the occasion not only to pay tribute to Johnny Cash, but also to officially launch the restoration activities on his boyhood home,” said Dr. Ruth Hawkins, director of Arkansas Heritage Sites at Arkansas State University, which is overseeing the restoration.  You can listen to FM 89’s interview with Hawkins above.

The ceremonial first step in its restoration, Hawkins says, will be resetting a cornerstone in the foundation.

The work is expected to take about six months, then, with the help of Cash’s brother Tommy and sister Joanne, furnishings will be added, similar to what the family had in the home.

“They have pretty much described all of the furnishings that were in the house and told us colors and patterns and who sat where at the dinner table and all those kinds of things,” said Hawkins.

It’s hoped the house can be opened to the public by June of 2013, but that may be contingent upon raising more money for the project.

Hawkins says this month’s event will officially launch a national fundraising campaign to raise the rest of the money needed.  She hopes a total of $3.8 million can be raised, which would also go toward renovating the Dyess Administration Building, a theater, which will serve as an orientation center for visitors, and other amenities.

Johnny Cash is considered by many to be the most influential musician to come from Arkansas, and Hawkins says notes are often found on the fence or doors at the home from people around the world.

Cash was only a few years old when the family moved in, and in his 1997 autobiography with Patrick Carr, described the home as “the Promised Land: a brand new house with two big bedrooms, a living room, a dining room, a kitchen, a front porch and a back porch, an outside toilet, a barn, a chicken house and a smokehouse.  To me, luxuries untold.”

The Dyess Colony was an agricultural community founded in 1934 as part of President Franklin D. Roosevelt’s new deal.  The Cash family was one of 500 that moved there to operate farms.

The house was lived in by many people until being purchased recently by Arkansas State University.  Some alterations were made to it over the years, but Hawkins says when they began tearing away the additions, the original materials were still underneath.

The events on Feb. 26 are open to the public and will begin with a restoration launch at the Cash home at 2 PM.  Because it’s located on a small rural road, those wanting to attend are asked to take shuttle buses from the Dyess Community Center parking lot, on State Highway 297 at East 4th Street.

At 3 PM the event moves to the community center, with daughter Rosanne Cash and other family members marking what would have been Johnny Cash's 80th birthday.

"We expect it will be primarily a family tribute where they will be performing some songs.  They will be reminiscing about their father and brother, telling stories,” Hawkins said.