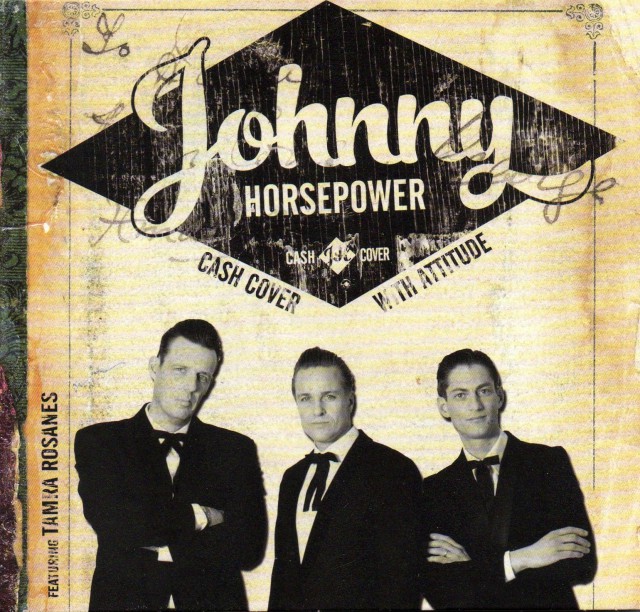 We were very pleased to receive the album 'Cash Cover With Attitude' from the guys of 'Johnny Horsepower', the Cash tribute band from Copenhagen, Denmark. The band was formed in 2009 to pay tribute to the young and rebellious Johnny Cash. Notes on their album say 'The reason was and stilll is a profound passion for the '50s Johnny Cash & The Tennessee Two.' You definitely get that experience when listening to the album.

Singer Dennis Greis Lydom doesn't impersonate Cash. In my opinion, it's a good thing, because to be honest, there is only one Cash. Dennis has his own style that suits very well. Not drifting too far away from Cash but definitely with his own interpretation. And man, he sure can hit low notes! Also notable is the really mean double bass slapping of bass player Tim Kristensen. You have to hear 'Jackson'. Awesome job there. And there's the electric guitar picking that brings the boom-chicka-boom. Morten Metniece Frederiksen knows how to pick. You just can't sit still. All together they sound really rocking'.

The album is available on both vinyl and cd. The design of both is nice and slick. On the inside of the cd version a collage of photo's is added. The vinyl version contains 10 songs while the cd has 13. The songs that were not added on the vinyl album are 'It Ain't Me Babe', 'Country Boy' and 'Daddy Sang Bass'.

So there are 13 songs on the cd version. Tracklisting on the album is:

From the first notes on the album you feel like stepping back in time to the authentic boom-chicka-boom sound of 'The Man In Black'. The guitar, the double bass, the vocals, it's all there to recreate the feeling. Staying true to the originals but also adding plenty of themselves to the sound. The trio is joined by Tamra Rosanes on 'It Ain't Me Babe', 'Jackson' and 'Daddy Sang Bass'. Dennis' and Tamra's voices fit well together and the duets add a good variation to the album.

A personal favorite on the album is 'The Wreck Of The Old '97'. Not only because I already dig that song a lot, but because the song starts with a 'vinyl' touch. Now that is a nice surprise. It gives it a cool authentic touch. Another favorite is 'It Ain't Me Babe'. The song has bluesy feeling and stands out.

Overall this is a nice album to add to your collection of Cash tribute albums. Yes, a tribute album is always nice to listen to, but seeing a band live might be even better. Especially when it's Cash related. I think most of us like to hear the real Cash at home and go out to experience what it was to be at a live concert. These guys nail it with their live performances. Although I've never seen them live, I got a good impression thanks to some videos. Check these out:

They guys play about 60 shows a year. Most of them in Denmark, but also in Sweden, Germany, France, Italy and France.They've already got quite some shows planned for this year, so if they are near, you have check them out!