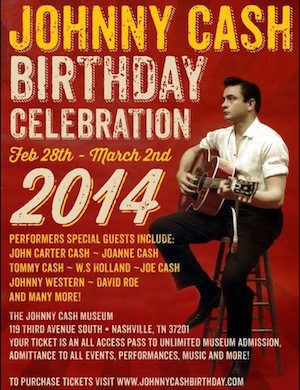 Note: This review was written not long after attending the 82nd Johnny Cash Birthday Celebration in February of 2014.  It is being published now for those who couldn’t make it out last year, but are going this year, or considering making the trip.

I wrote a review on the Johnny Cash Museum several months ago, but it hardly needs my endorsement at this point.  Any trip advisor will tell you that it is well-worth the trek to Nashville and houses the largest collection of Johnny Cash material.  But the price of admission for the birthday celebration included limitless weekend access to the Johnny Cash Museum, so it is worth mentioning here.

For a discount price, I stayed at the Hyatt Place hotel, which was only a five minute walk from the museum. (It also featured a very cool pixel picture of Cash in the foyer--take a picture of it with your cell phone if you make it out there.)  Attached to the museum is a Johnny Cash event center where the concerts and other programs were held.  The event room itself has a Facebook page--suffice to say, it was both classy and rugged, like the Man in Black himself.  There were two concerts, one on Friday and the other on Saturday night, and each featured a different host of guest singers.

Friday evening, before the first show, I arrived early--and W.S. Holland and his wife Joyce were hanging out.  It was surreal--here was W.S. Holland, casually relaxing in a sweater, an hour before showtime--and he was talking to me!  A little under an hour later, I sat in the audience and saw him take the stage in his black suit and dark shades.  Surreal.  And he was joined by the legendary Dave Roe.  Then, John Carter Cash took center position and the band rocked out a number of Johnny Cash songs--including “Big River”--and a few Carter Family songs.  W.S. Holland also treated us to a few numbers, including a tribute song called “The Legend.”  Need I tell you who it was about?  Later on, Lorrie Davis Bennett--a genuine member of the Carter Family, showcased some Carter classics, including the great--and endless--”Worried Man Blues” and she gave a superb performance of The Youngblood’s “Get Together.”  Cash recorded both songs on his TV show.

Before the second concert some games and activities were prepared--I understand they are a tradition.  There were some rounds of trivia and prices given--though it was just great to be surrounded by other Cashologists.  Mark Stielper, a Cash historian, gave a behind-the-scenes presentation over Cash’s TV series and rise to American icon.  Then there was the fan jam--and there should probably be a new show called “Johnny Cash Fans Got Talent.”  The only sour performance, in fact, was my own.  But the backing band was phenomenal. Then Bill Miller, founder of the museum and host for the party, announced the raffle winners.  There were prizes, big and small--from greatest hits CDs to vinyl 45s, from posters to license plates, from Johnny Cash trading cards to three checks hand-signed by Johnny Cash.  Pretty cool, don’t you think?

The second night’s lineup included God’s Outlaw, who got everyone involved in the great song “Stampede,” as well as a few original numbers by Johnny’s nephew Joe Cash and some gospel tunes by Johnny’s sister Joanne.  Tommy Cash--who I’ve been lucky enough to see twice before--also delivered on many Cash classics as well as his own “Six White Horses” and the most charismatic performance of “That’s Alright, Mama” that I’ve ever seen--sorry, Elvis!  Then Melanie took the stage to perform several of her own hits, including a more recent song “Working Legend,” which pays tribute to the Man in Black.

It was a fun trip, and needless to say, there is a lot to do in Nashville--or Cashville, as some now call it--and attending birthday celebration was a great experience.