On July 9, 1958, Johnny Cash announced that he was leaving the legendary Sun Records label and owner Sam Phillips for a recording contract with Columbia Records. This marked an important change in Cash's career and further led to the downfall of Sun Records. WYEP's Roots & Ryhtm Mix host, Jesse Novak discusses Cash's time at Sun and the impact Cash's departure had on the label.

Cash moved to Memphis, home of Sun Records, in 1954 and started playing out with The Tennessee Two: Marshall Grant and Luther Perkins. He eventually decided he would go to Sun Records to audition for Sam Phillips.  It was the unique recording style that lured vocalists to Sun Records. Jesse Novak describes the Sun Records sound; "Pretty much any of the vocalists that recorded there had a very booming vocal sound."

Johnny Cash signed with Sun and brought them "Hey Porter," which to that they said “Bring us a song we can sell!"  After that he wrote  “Cry Cry Cry” overnight and Sun released it as his first single in 1955.  Novak comments on Sun Record's decision to release "Cry, Cry, Cry" over "Hey Porter," ""Cry, Cry, Cry" is a better song.  It had a sweeter melody to it and I think the subject matter is something people can relate to more.""

Elvis Presley, Carl Perkins, Jerry Lee Lewis and Johnny Cash were all on Sun records at once.  The Million Dollar Quartet was an impromptu recording session was spawned on one  faitful day.  The record included Elvis, Carl Perkins, Jerry Lee Lewis and Cash.  Novak explains the famous impromptu recording, "It was one of the earliest rock and roll supergroups.  There hadn't really been much like that before."  There are a lot of myths about how the recordings came about, one thing is for sure, "The myth is just an important as the truth with rock and roll."

Johnny Cash was known for being country music's "Man in Black."  He wrote songs about life's struggles.  Tracks's like "Folsom Prison Blues" captured the darker side of American culture.  Jesse comments on Cash's decision to record in Folsom Prison, "I think the idea of recording the live album at Folsom Prison Blues was revolutionary.  It shows how ahead of his time he [Johhny Cash] was.  It was not some gimmic, he  just thought this would be a great audience to record for."

Cash decided to leave label back on this date in 1958 and went on to sign with Columbia Records.  "It's probably not ironic that they didn't do a lot in the late sixties.  It marked the downfall for them, they really didn't stick with the sound or make it much further than that." 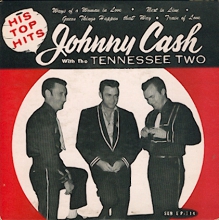